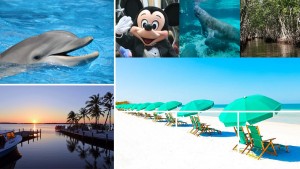 Florida is definitely the COOLEST STATE in the nation.

This colorful and exciting part of the US offers vacationers a variety of activities and sights.

So here are some interesting facts:

Florida is the 27th US state. It is located in the southeastern United States and is one of the most populous state of all American states. Florida has a population of about 18 million people, living in an area of over 170,00 km².

The peninsula of the same name was discovered by the Spanish explorers during the Easter period and named after it: Easter means in Spanish also Pascua Florida. The capital of Florida is Tallahassee.

The most well-known cities of the state include Miami, Orlando, Tampa, Fort Myers, Daytona Beach, Fort Lauderdale and Palm Beach.

Florida is more than just facts – it is unique! The country offers everything your heart desires: fantastic powdered sugar beaches, turquoise blue water, an extremely fascinating wildlife, culture and attractions in redundancy.

Orlando is known as the theme park capital of the world: Disney World and SeaLife are an absolute must-see. Or visit the new avatar theme park, in which the eponymous film is sensational walk able and experienceable. Or you could walk through and vividly enjoy the new theme park that is based on the Avatar movie.
Paddle through the Everglades in a kayak, stroll in modern shopping malls, hike in national parks, admire the underwater world while diving and relax at one of the countless dream beaches.
Or rent your own boat and explore the many waterways in Cape Coral, Fort Myers and the surrounding area.

Here you will find a very comprehensive guide.

COMPLIANCE NOTICE: We have build all out properties in accordance with world-wide standards and received a huge number of awards, which prove our high level of service. Never-stopping development is the key factor of our company.

Enter your email address to keep up with our discounts and special offers.